Foster + Partners has been announced as the architect for JPMorgan Chase’s 60-story supertall headquarters at 270 Park Avenue, and has released the first batch of official renderings for the Midtown East project. The 1,388-foot-tall office skyscraper is currently under construction and will yield 2.5 million square feet of flexible and collaborative space, and will become the tallest building in New York City to be fully powered by a New York State hydroelectric power plant, operating with net-zero emissions. The massive structure is rising on a full-block site bound by Park Avenue to the east, Madison Avenue to the west, East 47th Street to the south, and East 48th Street to the north. 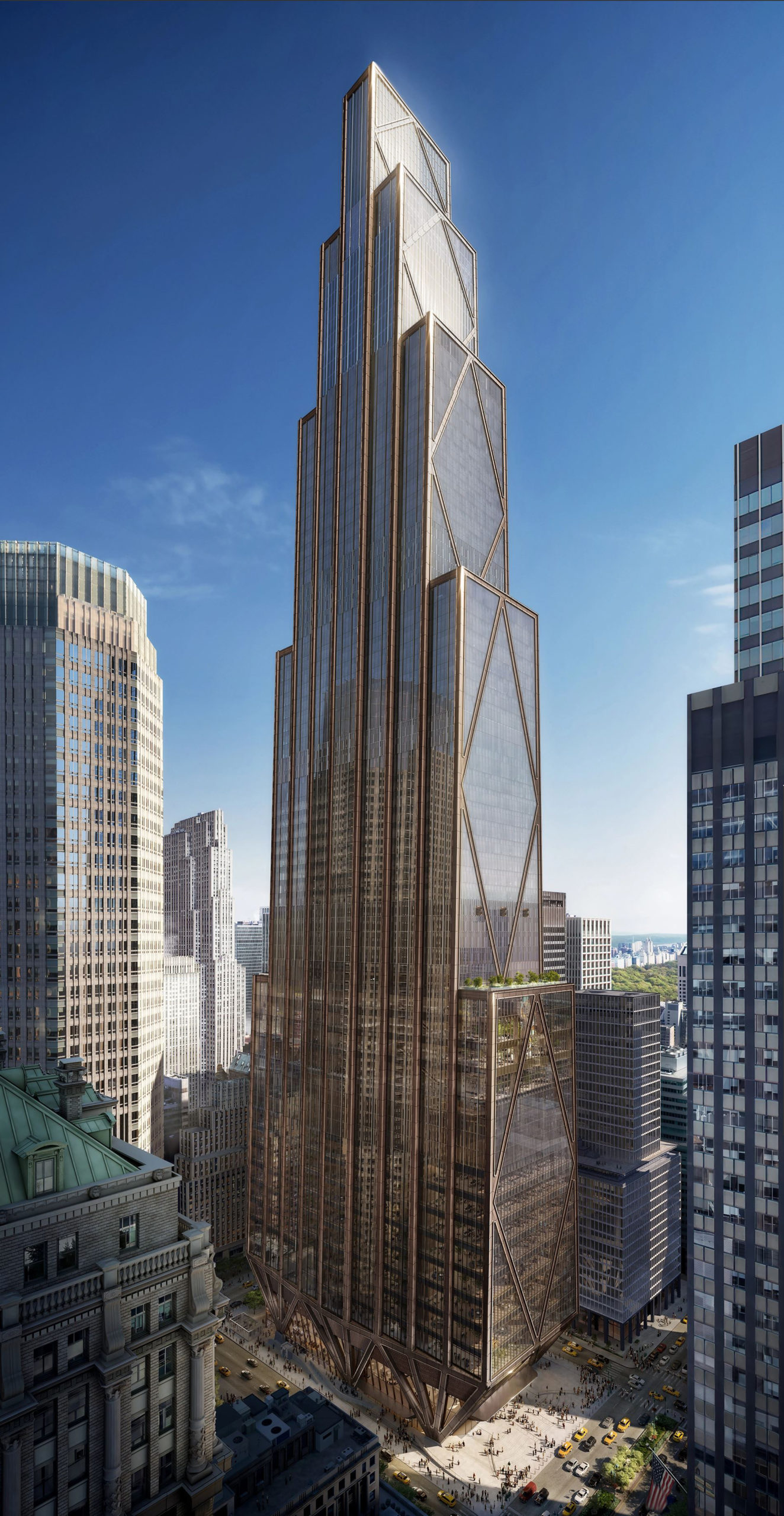 The tower is shown clad in a mix of floor-to-ceiling glass and copper panels, with diagrid columns creating a series of triangular and diamond-shaped outlines across the height of the eastern and western elevations. The lower setbacks on the sides of the building will be topped with landscaped terraces. An illuminated crown caps the structure. 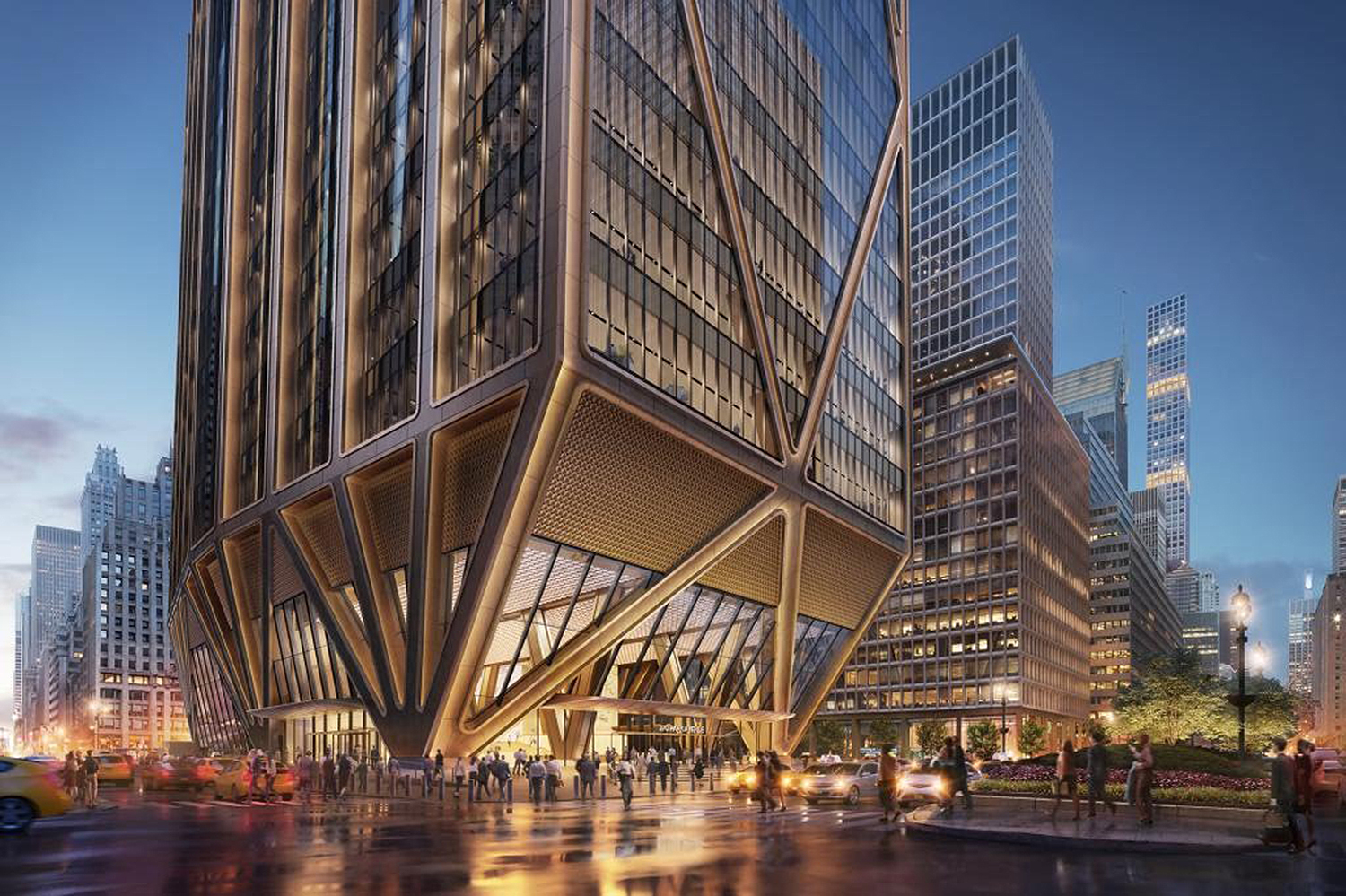 Looking north at the base of 270 Park Avenue. Rendering by DBOX 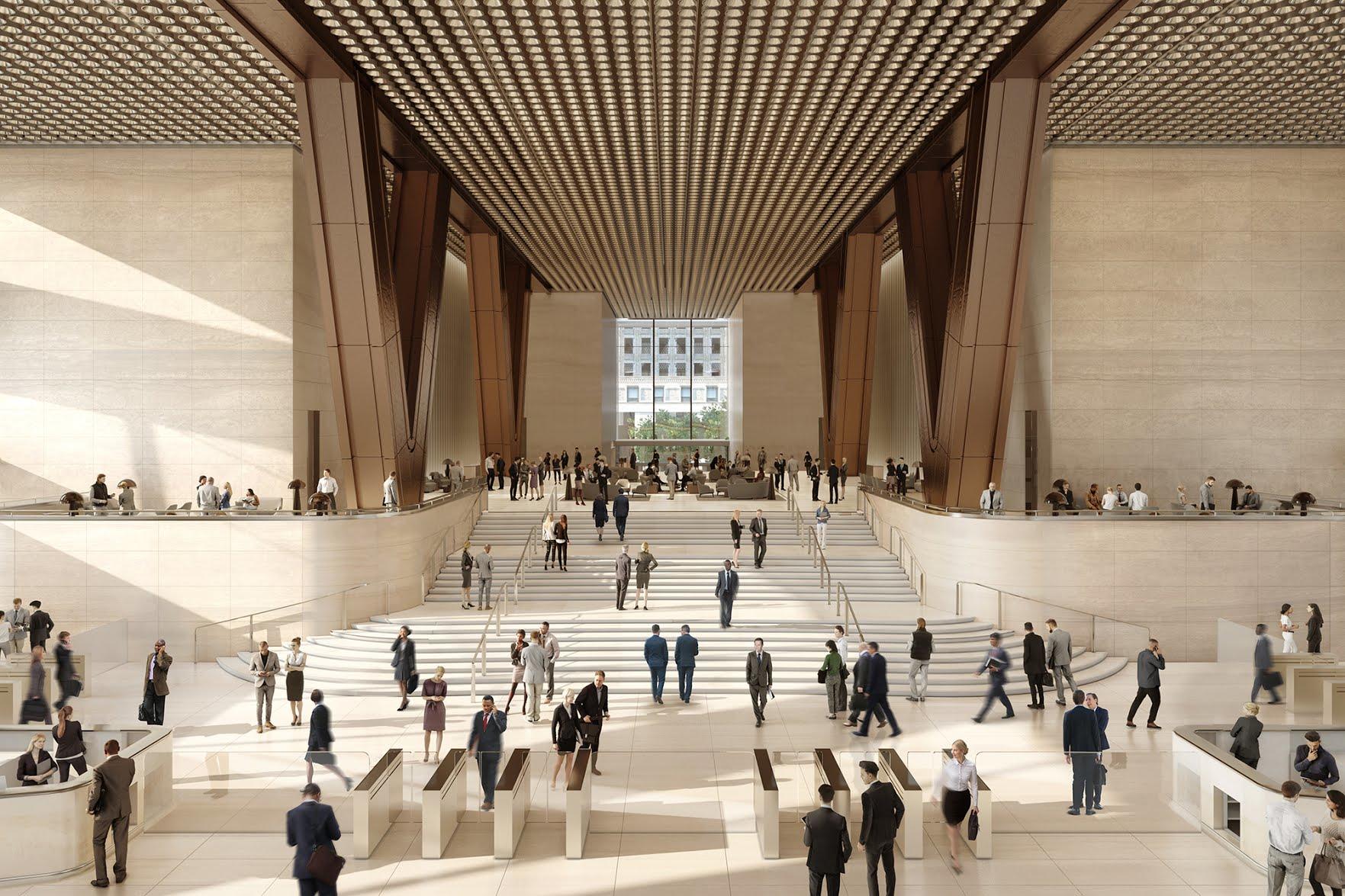 An event space is pictured below. The atrium is filled with landscaping and offers views looking out onto Park Avenue through the steel-framed superstructure. 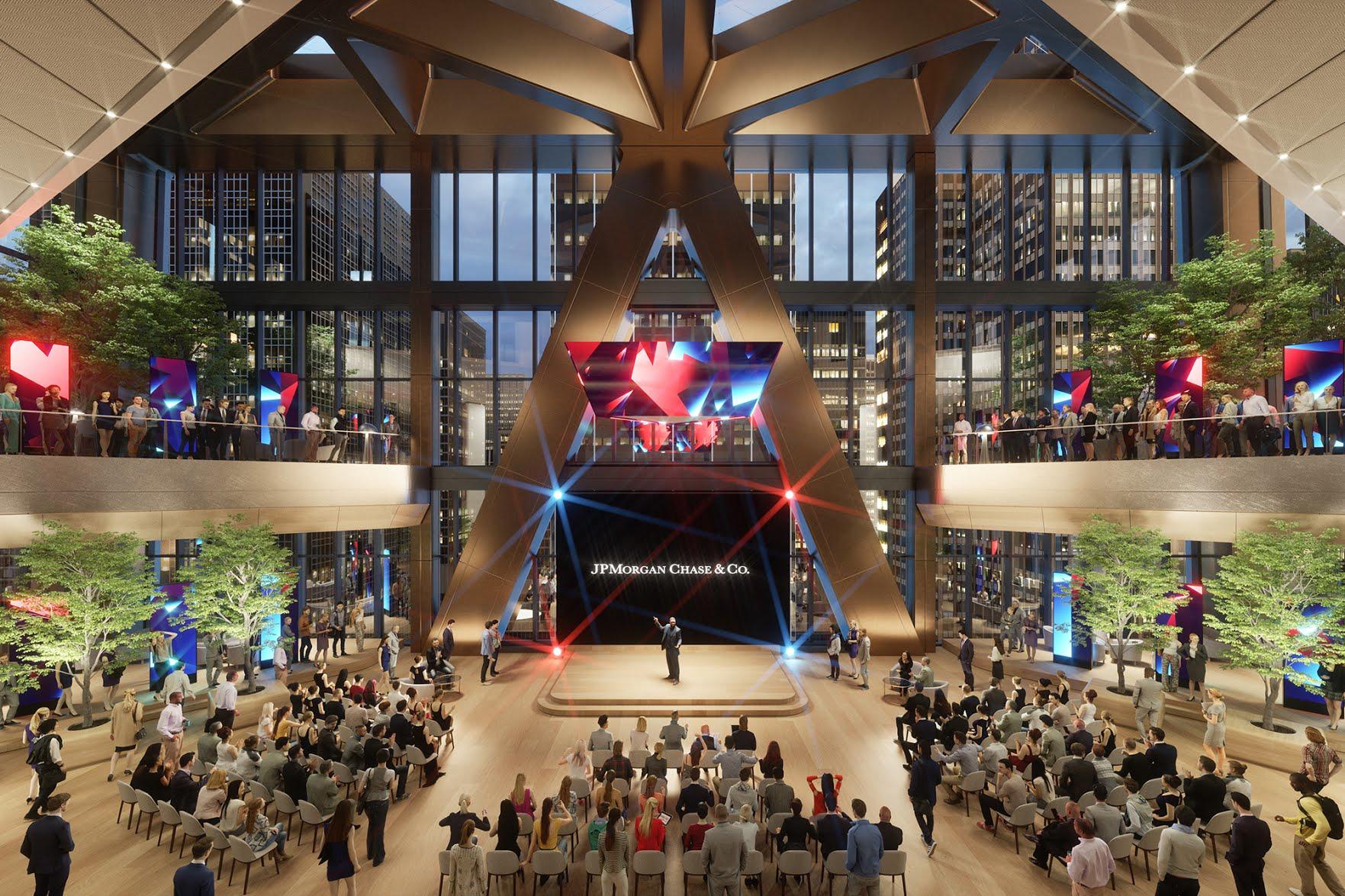 This dusk rendering best illustrates the tiered massing and overall position of 270 Park Avenue over Midtown, Manhattan, as well as the stepped form that culminates with the lighted mechanical crown. 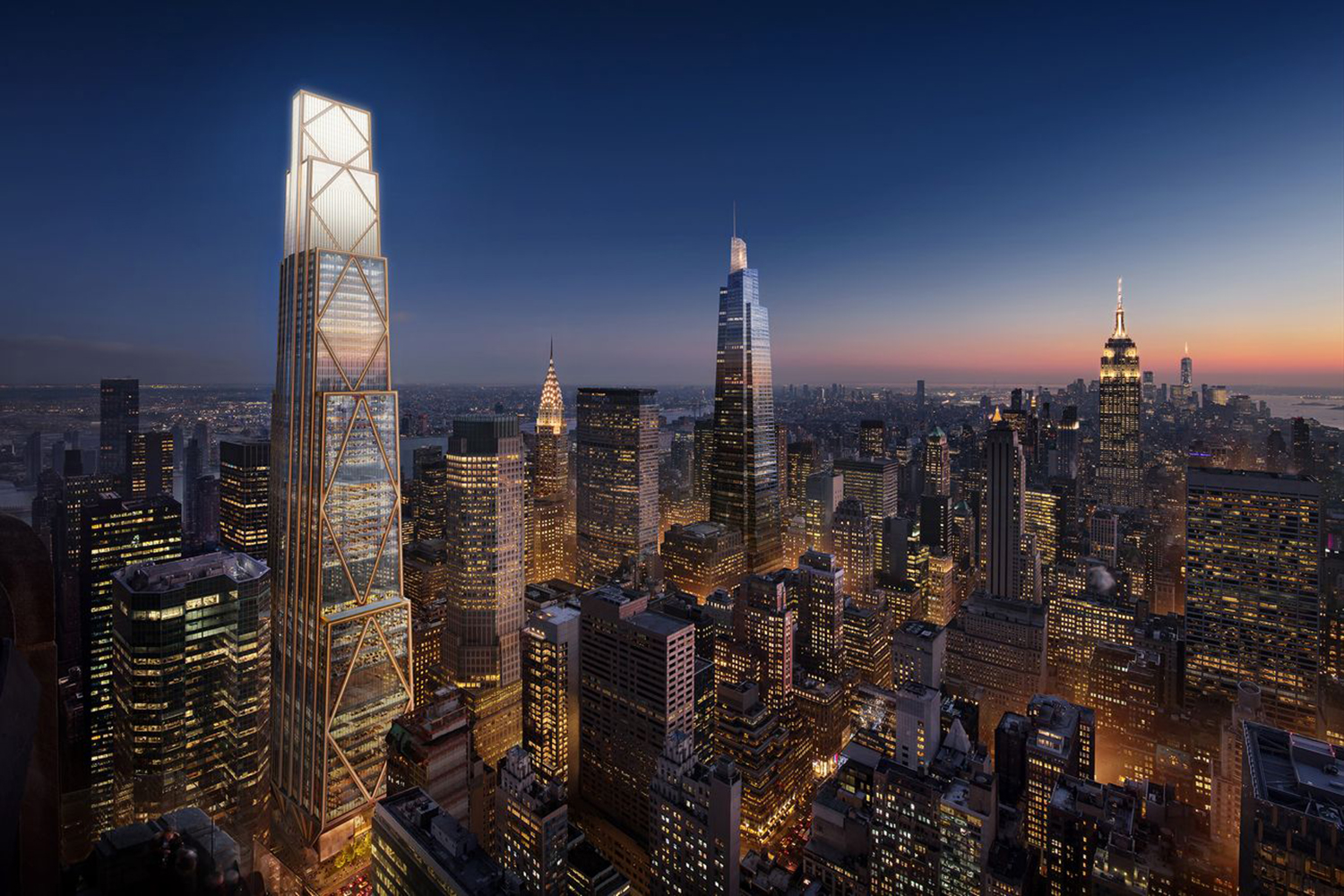 “270 Park Avenue is set to be a new landmark that responds to its historic location as well as the legacy of JPMorgan Chase in New York,” said Lord Norman Foster. “The unique design rises to the challenge of respecting the rhythm and distinctive streetscape of Park Avenue, while accommodating the vital transport infrastructure of the city below. The result is an elegant solution where the architecture is the structure, and the structure is the architecture, embracing a new vision that will serve JPMorgan Chase now and well into the future.”

“With our new headquarters, JPMorgan Chase is making a long-term investment in our business and New York City’s future while ensuring that we operate in a highly efficient and world-class environment for the 21st century,” said JPMorgan Chase chairman and CEO Jamie Dimond. “We are extremely excited about the building’s state-of-the-art technology, health and wellness amenities, and public spaces, among many other features. It is in the best location in one of the world’s greatest cities.”

270 Park Avenue will house up to 14,000 employees and is replacing the outdated Union Carbide Building that once stood on the site. There will be 2.5 times more public outdoor space on Park and Madison Avenues, featuring wider sidewalks and a large public plaza on Madison Avenue with natural green space. Amenities include a health and wellness center with fitness areas, yoga/cycling rooms, physical therapy, medical services, modern mother’s rooms and prayer and meditation spaces, a modern food hall featuring various food operators and healthy menus, and a world-class conference center at the top of the 60-story tower.

The green and sustainable goals include intelligent building technologies that uses sensors; AI and machine learning systems to predict and respond and adapt to energy needs; advanced water storage and reuse systems to reduce water usage by more than 40 percent; triple-pane glazing on the façade and automatic solar shades connected to HVAC systems for greater energy efficiency; outdoor terraces featuring natural green space and plantings; and the use of 97-percent recycled, reused, or upcycled building materials from the demolition of the Union Carbide Building. This far exceeds the 75 percent requirement of the leading green building standard.

Completion of 270 Park Avenue is expected around 2025.