China’s economy expanded faster than expected in the first quarter but official data revealed a recent contraction in consumer activity as lockdown measures to counter the spread of Covid-19 clouded the country’s growth outlook.

China’s gross domestic product rose 4.8 per cent compared with the same period a year earlier, after expanding 4 per cent in the final three months of 2021. On a quarter-on-quarter basis, GDP grew 1.3 per cent.

Analysts had projected gains of 4.4 per cent year on year and 0.6 per cent quarter on quarter.

Retail sales, a gauge of consumer spending, fell 3.5 per cent in March — their first year-on-year fall since July 2020 and worse than a projected 1.6 per cent decline — as authorities hardened restrictions to counter the country’s worst coronavirus outbreak in more than two years. In the same month, the official unemployment rate rose to 5.8 per cent, its highest level since May 2020.

The data will heap greater pressure on President Xi Jinping’s government, which has reaffirmed its commitment to a zero-Covid policy despite the mounting costs and disruption across the country’s biggest cities. In April, when economists expect activity to have deteriorated, infections across China increased and Shanghai, its financial hub, has remained largely sealed off.

The outbreak and subsequent spate of lockdowns erupted at a precarious moment for China’s economy following a debt crisis in its real estate sector and a wider loss of momentum. The government has targeted growth of 5.5 per cent in 2022, its lowest in three decades.

Fu Linghui, a spokesperson for the National Bureau of Statistics, said that “the operation of the economy was generally stable” but pointed to “frequent outbreaks” of Covid-19 in China and an “increasingly grave and complex international environment”.

“The country is facing recurring waves of the pandemic in many places and its impact on the economy is increasing,” he said.

Data for the first three months will not capture the full extent of recent events in Shanghai, which was in late March was plunged into China’s most severe citywide lockdown since the emergence of coronavirus in Wuhan. Analysts at Nomura last week estimated that 45 cities responsible for about 40 per cent of China’s GDP were under complete or partial lockdowns, and added the country was at “risk of recession”.

Tommy Wu, lead China economist at Oxford Economics, suggests the 4.8 per cent GDP increase “mainly reflects the growth seen in the official January-February data before the weakening in economic activities in March”.

He added: “The central government is now trying to balance minimizing disruption against controlling the latest wave of Covid infections, but the disruption is likely to last for weeks and will weigh on activity in April and into May, if not longer.”

In contrast to the sudden weakness in consumer spending, industrial production, which was a big driver of China’s initial recovery from the pandemic in 2020, added 5 per cent year on year in March. Fixed asset investment rose 9.3 per cent in the first three months of 2022 compared with the same period last year.

Even before a wave of the highly infectious Omicron variant gathered pace, China’s economy had been hit by a real estate crisis centered around highly indebted developer Evergrande that spread across the property sector. 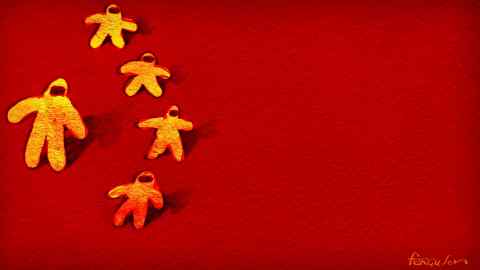 In a sign of the lingering effects of that crisis, new housing starts for apartments declined 20 per cent in the first three months of the year. Steel and cement production fell 6 and 12 per cent, respectively, in the same period.

In addition to its lower annual growth target, the government has also embarked on a round of monetary easing, which has included cutting crucial lending rates for the first time since 2020 despite a previous push to reduce leverage.

On Friday, the People’s Bank of China reduced the reserve requirement ratio for banks by 25 basis points in an effort to inject liquidity into the financial system.

Xi, who is this year seeking an unprecedented third term in power, has promoted a “common prosperity” campaign designed to reduce inequality. But lockdown measures now dominate the country’s economic trajectory and have stoked anxiety over supply chain disruptions.

Li Keqiang, China’s premier, has repeatedly cautioned in recent weeks of economic risks, following a warning from Xi in March of the need to minimize the economic impact of Covid policies.

Equities in China were down following the data release as concerns over the contraction in consumer spending outweighed the higher-than-expected reading on first-quarter growth.

The CSI 300 index of Shanghai- and Shenzhen-listed stocks was off about 1 per cent. Banks were among the worst performers as lenders faced the prospect that policy easing to cushion the economic blow of lockdowns risked affecting profits.

“We definitely think that Chinese policymakers are willing to make sure they reach their growth targets,” said Jean-Charles Sambor at BNP Paribas Asset Management.