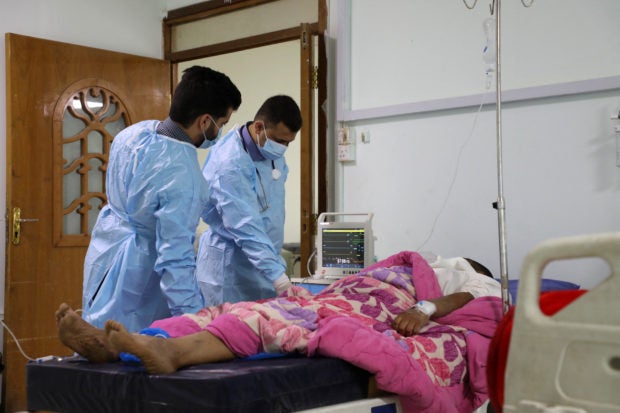 Doctors at a hospital in Iraq’s southern Dhi Qar province, examine a patient infected with the tick-borne virus Crimean-Congo haemorrhagic illness (CCHF), on May 25, 2022, during the country’s worst detected outbreak of the illness. The CCHF virus has no vaccine and onset can be swift, with a victim suffering from severe bleeding, both internally as well as externally and especially from the nose. It causes death in as many as two-fifths of cases, according to medics. (AFP)

NASIRIYAH, Iraq – Spraying a cow with pesticides, health workers target blood-sucking ticks at the heart of Iraq’s worst detected outbreak of a fever that causes people to bleed to death.

The sight of the health workers, dressed in full protective kit, is one that has become common in the Iraqi countryside, as the Crimean-Congo haemorrhagic fever spreads, jumping from animals to humans.

This year Iraq has recorded 19 deaths among 111 CCHF cases in humans, according to the Word Health Organization.

The virus has no vaccine and onset can be swift, causing severe bleeding both internally and externally and especially from the nose. It causes death in as many as two-fifths of cases, according to medics.

A poor farming region in southern Iraq, the province accounts for nearly half of Iraq’s cases.

In previous years, cases could be counted “on the fingers of one hand”, he added.

Transmitted by ticks, hosts of the virus include both wild and farmed animals such as buffalo, cattle, goats and sheep, all of which are common in Dhi Qar.

In the village of Al-Bujari, a team disinfects animals in a stable next to a house where a woman was infected. Wearing masks, goggles and overalls, the workers spray a cow and her two calves with pesticides.

A worker displays ticks that have fallen from the cow and been gathered into a container. 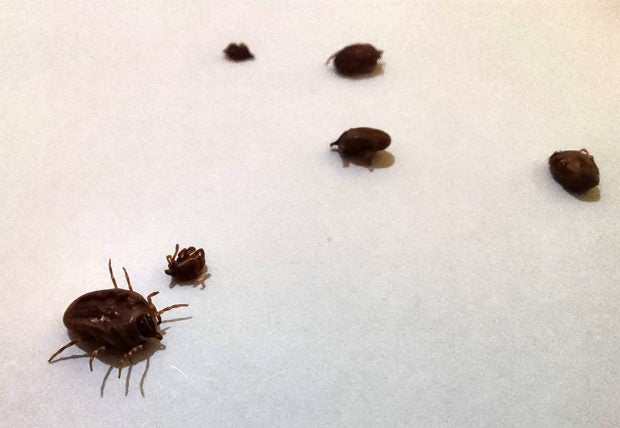 Ticks that cause the Crimean-Congo haemorrhagic illness (CCHF) are pictured at a health facility in Iraq’s southern Dhi Qar province, on May 25, 2022, during the country’s worst detected outbreak of the illness. The CCHF virus has no vaccine and onset can be swift, with a victim suffering from severe bleeding, both internally as well as externally and especially from the nose. It causes death in as many as two-fifths of cases, according to medics. (Photo by Asaad NIAZI / AFP)

“Animals become infected by the bite of infected ticks,” according to the World Health Organization.

“The CCHF virus is transmitted to people either by tick bites or through contact with infected animal blood or tissues during and immediately after slaughter,” it adds.

The surge of cases this year has shocked officials, since numbers far exceed recorded cases in the 43 years since the virus was first documented in Iraq in 1979.

In his province, only 16 cases resulting in seven deaths had been recorded in 2021, Hantouche said. But this year Dhi Qar has recorded 43 cases, including eight deaths.

The numbers are still tiny compared with the Covid-19 pandemic — where Iraq has registered over 25,200 deaths and 2.3 million recorded cases, according to WHO figures — but health workers are worried.

Endemic in Africa, Asia, the Middle East and the Balkans, CCHF’s fatality rate is between 10 and 40 percent, the WHO says.

The WHO’s representative in Iraq, Ahmed Zouiten, said there were several “hypotheses” for the country’s outbreak.

They included the spread of ticks in the absence of livestock spraying campaigns during Covid in 2020 and 2021.

And “very cautiously, we attribute part of this outbreak to global warming, which has lengthened the period of multiplication of ticks,” he said.

But “mortality seems to be declining”, he added, as Iraq had mounted a spraying campaign while new hospital treatments had shown “good results”.

Since the virus is “primarily transmitted” to people via ticks on livestock, most cases are among farmers, slaughterhouse workers and veterinarians, the WHO says.

“Human-to-human transmission can occur resulting from close contact with the blood, secretions, organs or other bodily fluids of infected persons,” it adds.

Alongside uncontrolled bleeding, the virus causes intense fever and vomiting.

Medics fear there may be an explosion of cases following the Muslim festival of Eid al-Adha in July, when families traditionally slaughter an animal to feed guests.

“With the increase in the slaughter of animals, and more contact with meat, there are fears of an increase in cases during Eid,” said Azhar al-Assadi, a doctor specializing in haematological diseases in a hospital in Nasiriya.

Most of those infected were “around 33 years old”, he said, although their age ranges from 12 to 75.

Authorities have put in place disinfection campaigns and are cracking down on slaughterhouses that do not follow hygiene protocols. Several provinces have also banned livestock movement across their borders.

Near Najaf, a city in the south, slaughterhouses are monitored by the authorities.

The virus has adversely hit meat consumption, according to workers and officials there.

“I used to slaughter 15 or 16 animals a day — now it is more like seven or eight,” said butcher Hamid Mohsen.

Fares Mansour, director of Najaf Veterinary Hospital, which oversees the slaughterhouses, meanwhile noted that the number of cattle arriving for slaughter had fallen to around half normal levels.

“People are afraid of red meat and think it can transmit infection,” he said.

Don’t miss out on the latest news and information.