Cruise, the autonomous vehicle unit of General Motors, has finally been given the green light to start charging fares for its driverless robotaxi service in San Francisco.

Cruise will be operating its passenger service at a maximum speed of 30 miles per hour between the hours of 10 pm to 6 am on select streets in San Francisco, adding another one and a half hours to its current service. The company will need additional state regulatory approval to charge members of the public for driverless rides in the rest of the city, according to a Cruise spokesperson. These preconditions come as part of Cruise’s “passenger safety plan” that limits the service to overnight hours and doesn’t include the city’s dense urban core, according to the CPUC’s draft resolution.

“In the coming months, we’ll expand our operating domain, our hours of operation and our ability to charge members of the public for driverless rides until we have fared rides 24/7 across the entire city,” a spokesperson for Cruise told TechCrunch . 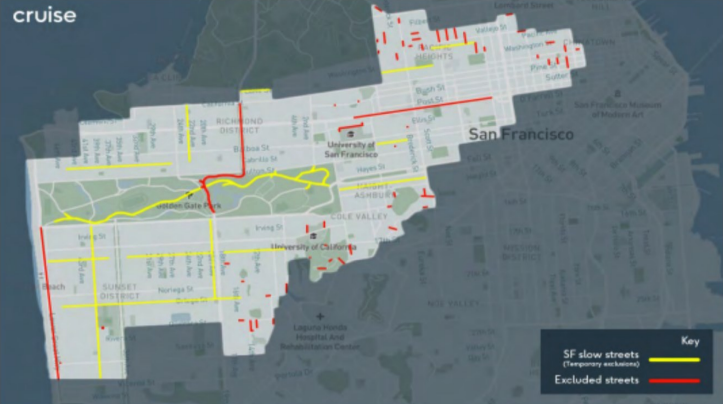 Cruise has been offering free driverless rides to San Franciscans in its autonomous Chevrolet Bolts between the hours of 10:30 pm to 5 am since February. The company began testing its autonomous vehicles without a driver in the front seat in the city in 2020, and started giving passengers free test rides in June 2021. In October last year, Cruise received a driverless deployment permit from the California Department of Motor Vehicles, which meant it could begin charging for autonomous vehicle services, like delivery. Crucially, the limits of the DMV’s permit stop at charging for robotaxi rides.

With this CPUC permit, Cruise is the only AV company in the city that can operate a commercial driverless ride-hailing service. Waymo, Cruise’s biggest competitor and the self-driving arm of Alphabet, also recently received a permit from the CPUC to charge for robotaxi, but only if a human safety operator is present during rides. Waymo has been offering a fully autonomous commercial ride-hail service in Chandler, a city southeast of Phoenix, since 2020, and recently expanded its driverless program in the city.

While Cruise’s CPUC permit allows for a fleet of up to 30 all-electric autonomous vehicles, Cruise has not been shy about promoting its plans to scale rapidly in the near future. Last year, former CEO Dan Ammann laid out Cruise’s plans for growing its fleet of purpose-built Origin AVs to thousands, even tens of thousands, in the coming years.

Last week, a group of San Francisco agencies — including the city’s municipal and county transportation authorities, the Bureau of Fire Prevention and Investigation, the Mayor’s Office on Disability and the SF Police Department — raised concerns about the lack of clarity within the CPUC’s draft resolution regarding limitations to Cruise scaling its fleet.

The draft resolution stated that Cruise must submit an updated passenger safety plan in the form of a Tier 2 advice letter before modifying “any changes to the hours, geography, roadway type, speed range, or weather conditions in which Cruise intends to operate…”

Notably, that language doesn’t oblige Cruise to have to appeal to the CPUC if it wants to increase its fleet size, a distinction which the SF stakeholders argue will “increase the negative impacts of driverless Cruise AV deployment” given Cruise’s “current approach to passenger loading,” another item of concern in the city’s comments on the draft resolution.

“Cruise’s current approach to passenger pickup and drop-off, stopping exclusively in the travel lane even when curb space is available, is below the level expected for human drivers,” the comments read, emphasizing the danger that an ever-growing fleet of AVs stopping in the travel lane could pose to vulnerable road users, like emergency responders, people with disabilities and older people and cyclists.

As part of its comments, the city provided a list of recommendations for the CPUC to integrate into its final resolution, including:

“Tea [draft resolution] applies the same ‘wait and see’ approach that the Commission used in regulating Transportation Network Companies (TNCs),” read the comments. “That approach undermined San Francisco’s climate goals, reduced transportation options for people who use wheelchairs, and significantly increased congestion and travel time delays on San Francisco streets used for robust public transit services. These outcomes are likely to be repeated unless the issues identified in these comments are addressed.”

The CPUC’s decision to award Cruise with a deployment permit sets a precedent for how the state will continue to regulate commercial AV services in the future, so feedback from the public is crucial. And indeed some of the city’s recommendations did made it into the final draft language.

For example, the deployment decision directs the Consumer Protection and Enforcement Division (CPED) of the CPUC to include whether or not a citation was issued in a collision or incident involving law enforcement in its categories of incidents for reporting. In addition, to support easier access, CPED conceded to post Cruise’s driverless deployment operational design domains on its website.

However, the final language in the decision doesn’t require Cruise to necessarily submit an advice letter if it wants to add vehicles to its fleet, though it does commit Cruise to engaging with the CPED to discuss whether such a letter might be necessary in the future as changes to fleet size could materially affect the passenger safety plan. Which is not to say Cruise is at the risk of going unchecked. The company needs to get approval from the DMV before increasing fleet size, a Cruise spokesperson told TechCrunch.

Finally, while the Commission encourages Cruise to provide wheelchair accessible vehicles and services for people with disabilities, the resolution doesn’t require it to run a commercial service.

This article has been updated to include information on which of the city’s recommendations made it to the final deployment permit language.