The Terra (LUNA) collapse may be almost a month old at this point but its impacts remain fresh in the minds of investors. Millions of users on the decentralized finance (DeFi) network had lost billions of dollars when UST had suddenly lost its peg, triggering a rise in the supply of LUNA, which meant more losses spilling into those who held the native token.

However, just like with any market crash, everyone is not a loser. The Terra Crash was no different in this regard. The billions of dollars lost in the crash did not just disappear into thin air. They went to other investors, who have emerged as the winners of the collapse.

Winners Of A Tragedy

The way the Terra ecosystem was structured gave a lot of power and control to the founders. This is because most of the coins from the pre-mine had gone to Terraform Labs and the backers. This included VCs and anonymous wallets, presumed to belong to the founders.

What this meant was that when crypto investors were beginning to adopt the Terra ecosystem, they effectively had to purchase the LUNA tokens from these anonymous and VCs’ wallets. These wallets would end up being the ‘winners’ in this case who are alleged to have been able to remove an estimated $6 billion before the collapse.

This $6 billion figure is gotten from the value of LUNA at the time of the transactions where large LUNA holdings were moved from these early wallets to exchanges and bridges back in 2021, and then again before the crash occurred in May.

Due to the demand created by the Anchor Protocol’s 20% yield, these large holders were able to burn their LUNA and mint UST. These generated stablecoins could then be fed into the high demand created by investors wanting to take advantage of the high yield. 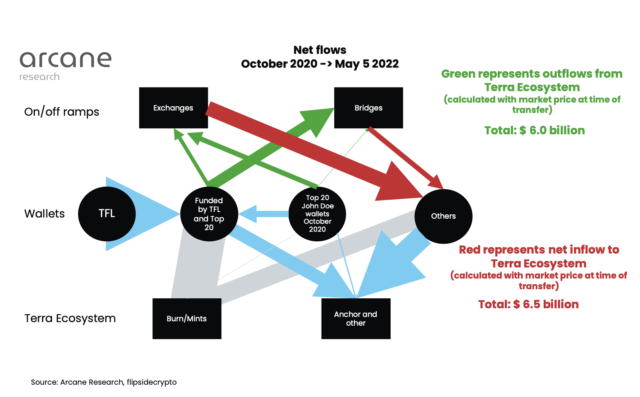 While $6 billion in total were tracked at the time of the outflows, Arcane Research puts forward that the outside profits made by the ‘winners’ could have been larger. This is taking into account not only those who had been able to sell off large holdings before the crash but those who had also shorted the digital asset while the price crashed.

How Terra (LUNA) Is Faring

In a bid to save the asset from total collapse, it was put forward that the Terra ecosystem is replaced. This led to the renaming of the old LUNA as LUNA Classic (LUNC) and the old UST as UST Classic (USTC). The new LUNA was then launched and airdropped to holders of LUNA taking at a particular snapshot, with more airdrops expected to happen over a period of 24 months.

The new LUNA had spiked very quickly on the day of launch, reaching as high as $19 per coin. But these gains would be wiped off just as quickly as they appeared, seeing the price decline by about 90%. There is no telling if the digital asset will ever be able to return to its past glory and by extension, its previous highs.

Related Reading | Market Optics: Is It Time To Get Out Of Small Cap Altcoins?

LUNA is now being traded across various exchanges at an average price of $6.5. While LUNC and USTC continue to see high trading volume across exchanges.